Los Angeles, CA’s progressive rock/metal outfit SIFTING have partnered with Gear Gods to premiere their brand new music video for their latest single ‘Blowing Fire’. Sifting Blowing Fire is the third music video taken from their new album Not From Here which was released on September 29th via Eclipse Records. The video was shot on location in Encino, CA, was directed by Alejandro Fumero Gil, and the song was produced by Steve Evetts (Sense’s Fail, The Dillinger Escape Plan, Suicide Silence). 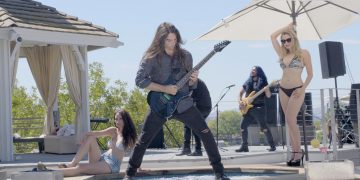 “Blowing Fire is about the growing income gap between the ultra-wealthy, and the blue collar working class,” states front man Eduardo Osuna Gil. “The video tells the story of a rich guy who hires people for minimum wage to work this huge party he was throwing at his home. He hires a catering company, chefs, party planners, and his favorite band to provide entertainment. During the course of the party, the millionaire and his guests are treating the hired help badly. Soon enough, the workers revolt! Afterwards, the millionaire realizes that he’s not above the workers, and they all end up enjoying the party together, ending the story on a positive note. Meanwhile, Sifting has been performing their set during the chaos, and at the end of the video, we see the band overlooking the aftermath while everyone is passed out”.