The brand new full-length album, The Spectator by Fenisia is out worldwide today! The album contains nine brand new modern heavy rock songs strongly influenced by the “deep south” sound of the American southern rock movement. Highlights on the album include videos for the songs ‘Lord Lumieres’, ‘Manifesto’, and ‘Burned In My Brain’. The Spectator was produced by Ray Sperlonga (American Idol), and mastered by Collin Davis (Imagica, Deeds of Flesh). The Spectator is the band’s new concept album which is named after the English newspaper published in England from 1711 to 1712, which quickly became the symbol of modern journalism. The story of The Spectator develops around the character Lord Lumieres, who is both a journalist and a man of science. More importantly however he is a metaphor for knowledge and truth. Lord Lumieres investigates and unmasks the deceptions and lies of every plot made up by fanatic leaders of illusory cults. He is able to scan both reality and oblivion, in search of the truth. Throughout the story, Lord Lumieres declares his ideals to the world which are born from the enlightenment philosophy. Every song on the album is an adventure and a chapter of the concept of which Lord Lumieres is the protagonist. 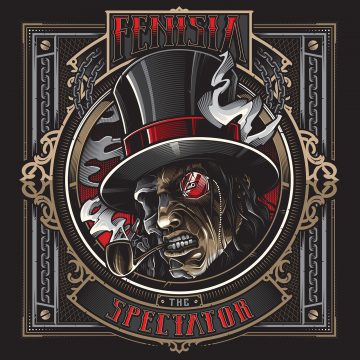 All over the world, press & radio are hailing The Spectator as a rebirth of the new heavy rock movement! True Metal gives the album (75/100) saying “this album will not disappoint, good job” while Games Brrraaains & A Head-Banging Life says “gets the body shaking and sets the mind alight with some good energy” giving it (8/10) stars. In addition, Necromance gives it (7.5/10) saying the album is “Highly catchy and loaded with high octane” while Rock Castle Franken says “Fenisia are well on their way to be a big player in stoner rock & southern heavy rock” giving it (7/10). See more here…

Stream or Download on iTunes or Amazon, and stream the singles via Spotify, Apple Music, Deezer, Music Unlimited, Pandora, iHeartRadio, YouTube Music and more at this location.