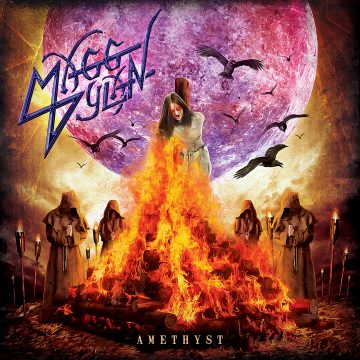 The album Amethyst features ten alternative metal anthems which showcase the band’s emotional raw energy. Highlights on the album include “Scarz” which was written about singer Suzanne’s personal experiences with bullying during her childhood, and as an adult in the personal fitness, and music industries. “Naked Alone In the Tub” was the most difficult song for Suzanne to release, as she didn’t want to share some of the darkest moments of her life as the lyrics talk about depression after life hands you a series of overwhelming blows. The third single from the album “Delusional” which goes in-depth about singer Suzanne’s past battle with alcoholism and her path to recovery. This band has been through a lot over the years, and their songs reflect the struggles, defeats, and triumphs which have given this album a life of its own!

The band have also revealed a new music video for the first single entitled “Scarz” which was directed by Eric Dicarlo at Square Up Studios. Watch it right now below:

“Scarz is about how other people try to tear you down and no matter what, you must believe in yourself and keep fighting” says vocalist Suzanne De Iulio. “We wrote the song because people refer to us as not pretty enough, not smart enough, not thin enough, not young enough, etc… we have all been rejected for a lot of things, but we fight back every time! For the video, I wanted my friend Becky Stephens to be featured because she is one of the toughest women I know. She studies mixed martial arts and professionally competes in OBC. More importantly, we admire her dedication and discipline which epitomize the overall theme of the song.”

Get the full-length album on iTunes, Amazon, or Google Play, and stream it via Spotify, Apple Music, Deezer, Music Unlimited, Tidal, Pandora, YouTube, and more!