Eclipse Records is extremely excited to announce the signing of Shotgun Facelift to an exclusive worldwide deal! The band is from Grand Forks, ND (USA) and they were formed in 2012. The band just wrapped up production on their new full-length album Dakota Blood Stampede which is set for a worldwide release on December 17, 2021.

“We aren’t like a lot of other bands, and Eclipse Records digs that” says rhythm guitarist Matt Person. “They made us feel like it wasn’t just a good thing to put our music in their hands, but that it was the right thing to do. I couldn’t be more excited about the direction of our careers!” Vocalist John Huber adds, “we are excited to work with a label whose direction and mission statement so closely marries our own!” Drummer Jody Smith says, “when we talked with the label, they just really knew their stuff. The whole team works like mad so we can focus on making the music, and they can promote it.” Curt DeCamp who plays bass in the band says, “we put so much of ourselves into this music, and ECLIPSE puts so much of themselves into promoting it that all the energies just feel right, man,” while lead guitarist Damian Goulet adds, “As a musician, you grind your whole life for the opportunity to work with a label like Eclipse Records and bet your ass we won’t waste it!” 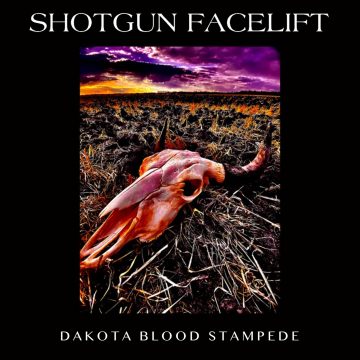 Pre-Save or Pre-Order the full-length album Dakota Blood Stampede at this location.

Shotgun Facelift was formed in Grand Forks, North Dakota (2012). The band plays an infectious blend of melodic power groove spawned by the New Wave of American Heavy Metal of the early 2000s. The band’s second full-length album due out later this year is called Dakota Blood Stampede and it is appropriately titled. It is anthemic, topical and relentless—nearly as if the entire album is making up for lost time. Produced by Tyler Pilot (Over You, Body By Torture, Anomic) at Red Dot Recording in Bismarck, ND, the album is a brutal debut by one of the most exciting, pummeling groove metal bands to hit the scene in recent years. See below for the full list of song titles. For more information on Shotgun Facelift signing with Eclipse Records, please follow them on Facebook, Twitter, or Instagram.