Sweden’s DESPITE has revealed the cover artwork and Synergi album details for their upcoming album, ‘Synergi’ which will be released worldwide via Eclipse Records on July 22, 2016. Synergi contains thirteen powerful songs of progressive, melodic death metal produced by Oscar Nilsson (Engel) at Crehate Studios. The cover artwork was designed by the band’s singer Peter Tuthill, and it perfectly captures the album’s concept as a whole. 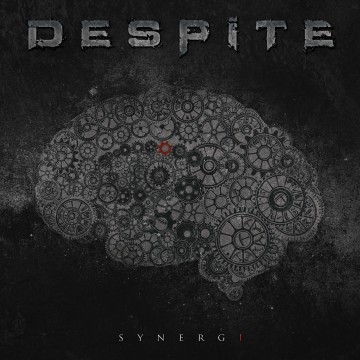 The entire Synergi album is already available for pre-order via iTunes and Amazon, both choices come with the songs “As You Bleed” and “Time Lapse” as instant grat tracks! The album is also available via Google Play. Stream the album via Spotify, Apple Music, and Pandora too. Additional options and information about Synergi will be made available as well.

Vocalist Peter Tuthill explains, “Synergi touches many subjects that we feel need more attention in this harsh world that we inhabit. Every song has a meaning, and they’re all pieces of the big jigsaw puzzle, so to speak. The title isn’t just the Swedish spelling for the English counterpart Synergy. Synergi puts the self, the “I” in the bigger picture. We chose to do this to signify that every single individual on this planet is a cog in the greater machinery. For change to happen, we all need to start thinking along the same lines, without borders. There’s no racial divides, no genders; there’s only humanity. We need to start taking care of our world, ourselves, and the other species we live alongside, before it all goes BOOM.”

DESPITE features three guitarists, each playing on eight-stringed instruments tuned a full octave below standard guitar tuning (drop-e), and just like a ten-ton hammer from the metal gods themselves, ‘Synergi’ will obliterate you with crushing rhythms, technical melodies, and emotionally moving, complex song structures. Just take a listen to the title track from ‘Synergi’, which is available for streaming below, and you will hear for yourself… this band is HEAVY!

Synergi is already available for pre-order via iTunes and Amazon. Either option comes with the songs “As You Bleed” and “Time Lapse” as instant grat tracks! The album is also available via Google Play. Additional options and information about Synergi will be forthcoming here.