Trending
You are at:Home»News»Carbellion sign worldwide deal with Eclipse Records

Eclipse Records is thrilled to announce the signing of Carbellion to an exclusive worldwide deal. The band is a post grunge modern rock band with soaring vocals, big ass riffs, and a thundering rhythm from Wisconsin (USA). Carbellion was formed in 2004 and are currently firing on all cylinders while cranking up the engine to release their third full-length studio album Weapons of Choice via Eclipse Records on March 17, 2023. The album was produced by Chris Djuricic (Nonpoint, Soil, Novembers Doom) at Belle City Sound in Racine, WI and mastered by Andy VanDette (Rush, Porcupine Tree, Beastie Boys) at Evolve Mastering. Pre-order / Pre-save Weapons of Choice at this location.

For a sample of the band’s past work, check out their independently released music video for the song “Without a Trace” below:

“We are really stoked about working with Eclipse Records! These cats get the business side of rock n’ roll and they will be a great partner to release this beast of a new record” says lead vocalist Cameron Kellenberger. “We had no intention of shopping the new record to labels when we recorded it, but after hearing the final product we all agreed that this record could be the catalyst to take our band to the next level” adds drummer Brent Nimz. “The only way to do that was to partner up with someone who truly believes in our band and has the means to get our music heard by a much larger audience than our past independent releases. We began reaching out to record labels that included some of our favorite bands on their roster. The band discussed each offer that we received and decided Eclipse Records would be our new home.” Guitarist Brandon Bauer adds, “We are beyond excited that Eclipse records are teaming up with Carbellion to bring American Heavy Rock to an even bigger worldwide audience.  Geared up to be part of a great roster and working with an amazing team at Eclipse” 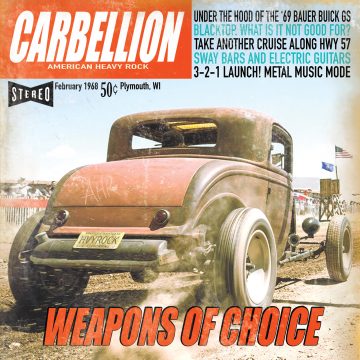 The band’s third full-length studio album Weapons of Choice contains ten new songs and is scheduled for release on March 17, 2023. Pre-Save or Pre-Order the album at this location. Tracklisting is as follows: