Trending
You are at:Home»News»Saint Diablo tapped by Avatar as support for upcoming ‘Hail the Apocalypse’ tour 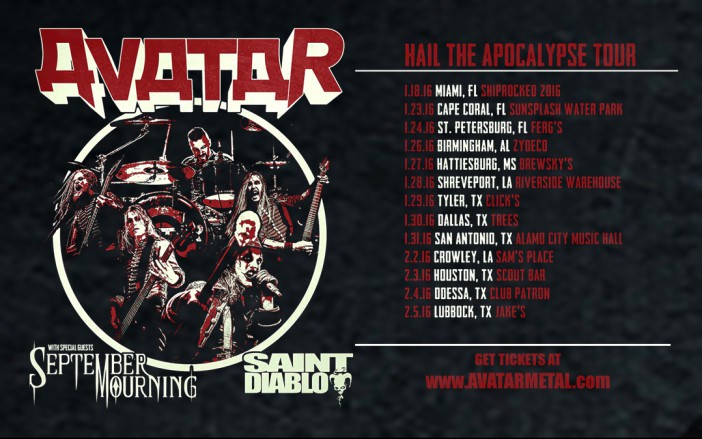 Saint Diablo have been confirmed as support for Avatar and September Mourning on select dates of the upcoming ‘Hail The Apocalypse’ tour. The band will jump on the Avatar tour starting January 26 in Birmingham, AL. Confirmed dates and venues are listed below, for tickets visit http://avatarmetal.com/instudio/tour-dates/

Saint Diablo’s latest album “Devil Horns and Halos” was released on November 13.  The album was produced by Tim Gilles (Anthrax, The Misfits, ill Nino) at Big Blue Meenie studios in Jersey City, NJ.  They have also released a new music video for the title track, “Devil Horns and Halos”.  The video was directed by Scott Hansen at Digital Thunderdome Studios. It has already racked up over 70,000 views within its first month.