Brisbane’s As Paradise Falls have revealed a crushing new music video for their latest single Captive to the Creation. The video captures the awe-inspiring energy of As Paradise Falls in a live setting. Directed by Colin B Cadell, the video features Clint Curtis (Down Royale) on guest vocals, and was filmed at Crowbar in Brisbane. Watch the Captive to the Creation music video below:

“Filming the video in a live environment was always something we wanted to do for this song” explains guitarist Danny Kenneally. “It’s a challenge because everything is spontaneous, and anything can happen. The idea of the clip is to represent a glimpse of what can be expected from a live As Paradise Falls show. It captures the energy of the band on stage fully immersed into our craft.” 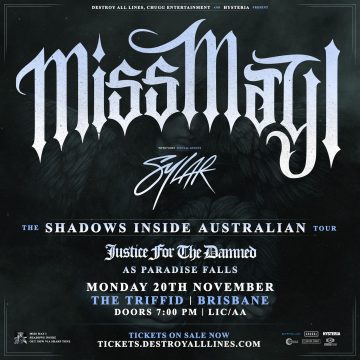 The band will also be supporting Miss May I at The Triffid in Brisbane on November 20, 2017. Also on the bill are Sylar, and Justice for the Damned. The show is presented by Destroy All Lines, Chugg Entertainment, and Hysteria Magazine, and tickets are available here. This will be the last show for As Paradise Falls in 2017, as they begin writing new material for their next album.