Just in time for the Holidays, Australian nu-deathcore metal band As Paradise Falls have gifted us with a creepy new music video entitled “KFBR 392“. This is the third music video from their latest EP album Madness / Medicine which was released on September 23, 2022 via Eclipse Records. The video was directed by Daniel Kenneally, and the EP was produced, recorded, mixed, and mastered by Shane Edwards (Northlane, Trophy Eyes, Hellions) & Danny Kenneally at Studio 28. Stream the full EP album on Spotify, Apple Music, Pandora, Tidal, Deezer, and Amazon Music via this link and watch the video via YouTube below:

“This song was an experiment into a new direction which we wanted to explore. It is being talked about as breaching the forefront of a new genre called Nu-Deathcore and we’re all about that.”, says guitarist Danny Kenneally. “The song itself has stood out as a popular track on our latest EP Madness/Medicine and it’s one of our favorites so we decided to utilize this to come up with some chaos. We had zero plans when it came to this video, just to produce a whole bunch of chaos with our characters, performances and the edit. The video was shot by myself via my photo/video project 1050 Collective with my business partner Josh Francis. This is the first time I’ve been able to step outside of my comfort zone and shoot, direct and edit one of our music videos and it has opened a whole new world to me with a lot of ideas in the pipeline. I wanted to try to capture the intensity of our live act as well as the chaotic thinking process we generally go through when planning things…” 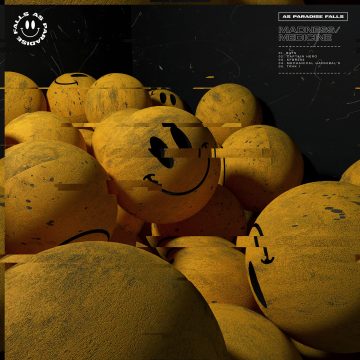 Madness / Medicine by As Paradise Falls is a 5 track EP that will defy what a two-piece band is capable of. With the influence of this modern Grime & Hip-Hop, old-school Deathcore and a futuristic look on how their music should be perceived, the band teamed up with longtime friend & producer Shane Edwards (Northlane, Trophy Eyes, Hellions) at Studio 28 in Thailand where the 5 tracks were transformed into a modern day monster. Due to COVID-19 restrictions, Danny was unable to travel for the mixing/mastering process and resorted to utilizing Facetime and streaming from his home studio to assist with the final process of the EP.

For more information about As Paradise Falls and their “KFBR 329” music video, please visit them on Facebook, Twitter, or Instagram, and follow the band on Spotify, Apple Music, Pandora, Tidal, Amazon Music, and Deezer now!