Eclipse Records is elated to announce the signing of antifolk industrial metal band American Anymen to an exclusive worldwide deal! The band was originally started in 1999 by Brett Sullivan as a video project with roots in the New York antifolk scene, and recently leapt into the industrial metal genre. American Anymen have just revealed a lyric video for their new single “Fentanyl Death Kiss”, as well as announcing the availability of pre-orders for their upcoming twelfth studio album Cities Changing Names which is set to drop worldwide on June 10, 2022. Stream the single on Spotify, Apple Music, Pandora, Amazon Music, Tidal, and Deezer and watch the video via YouTube right now:

“This song is about being a drug addict” says lead vocalist and composer Brett Sullivan. “I wrote it because on a few occasions I have been tasked with checking up on people who were not answering their phones or they went MIA for a few days. As you might expect, friends and family became worried and thought they were dead. I had a fearful image in my mind of the drug addict thinking their dead body was a gift to the person who discovers them, like some sick Christmas present.  I think singing about addiction is still relevant.  In the past, being a heroin addict was like playing a game of Russian Roulette, especially with the amount of Fentanyl now on the street it is literally a death sentence. This song doesn’t say don’t use drugs, it just says if you do… you’ll be dead in two weeks.“ 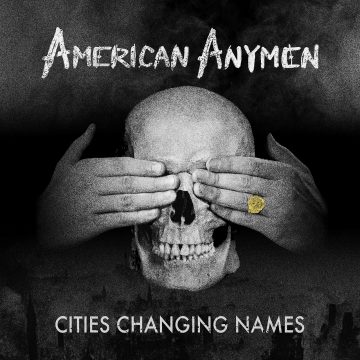 American Anymen’s new LP entitled Cities Changing Names is an album of sonic violence and unbridled energy. Each of the eleven songs on the album are a burst of power that features a sort of pristine mechanization wearing a cloak of raw, human tragedy. This sweet dichotomy is both elegant and hard core, addictive and welcoming. The musical presentation itself is based on this technique of pairings reversed in no clearer a manner than the production of the drums versus the vocals. The “norm” would have the hummingbird 16ths deep and resounding, the snare rich and reverberant. In turn, the vocal would be “up close,” like the “presence” we all enjoy face to face, in that intimate moment right before a kiss. Here, American Anymen turn that on its head, presenting the drum sounds in your face and at the very doorstep of your heart, close enough to touch, while making the vocal echoed, distant, haunting, and mysterious. Each track raises the level of the game in terms of brute force and fireworks, and the listener comes away feeling potent and strong.

For more information on American Anymen and their “My Vacation” music video, please visit them on Facebook, Twitter, or Instagram, and follow the band on Spotify, Apple Music, Pandora, Tidal, Amazon Music, and Deezer now!