Trending
You are at:Home»News»A BREACH OF SILENCE to support A Skylit Drive on upcoming Australian tour 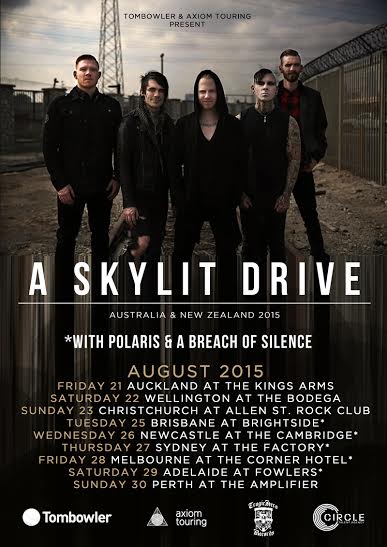 Amidst a landslide of stellar reviews for their latest album, Brisbane-based metal band, A Breach of Silence have announced they will be supporting A Skylit Drive on their upcoming Australian tour. The tour will kick off on August 25th in Brisbane, and is scheduled to wrap up in Adelaide on August 29th. Also supporting will be Sydney up and comers, Polaris. See below for tour dates. This will be A Breach of Silence’s third tour in support of their latest album, The Darkest Road which was released by Eclipse Records. Previously, the band traveled across the pond for a six week North American tour supporting DROWNING POOL and LIKE A STORM, as well as headlining their own tours across Australia and New Zealand.

A BREACH OF SILENCE recently premiered their new music video for the band’s latest single Vultures. The video tells the story of a homeless man who returns a lost wallet to a young, well-dressed businessman – and saves his life in the process. The song is taken from their highly-praised sophomore album The Darkest Road which was released on October 7th by Eclipse Records, and named “One of the Top 25 albums of 2014” by Hysteria Magazine. It also debuted at #1 on the iTunes Metal Chart (Australia), and at #20 on Australia’s Purely Independent Chart.

The Darkest Road is available for download from iTunes, and GooglePlay, while CDs are available via Eclipse Records, BestBuy, Fye, JB Hifi, and Amazon. The full album is also streaming via YouTube, Spotify, Pandora, and Rdio.