A BREACH OF SILENCE have premiered their ground-breaking new music video for the band’s latest single Night Rider via Bloody-Disgusting.com. The ambitious music video literally puts the viewer “in the boots” of the green-faced undead lead character, and into the action of western-style shootouts, fist fights, and a dramatic showdown. Join our heroic vigilante, Night Rider as he shows a group of outlaws terrorizing a peaceful town, who’s boss. The video may be watched at this location. 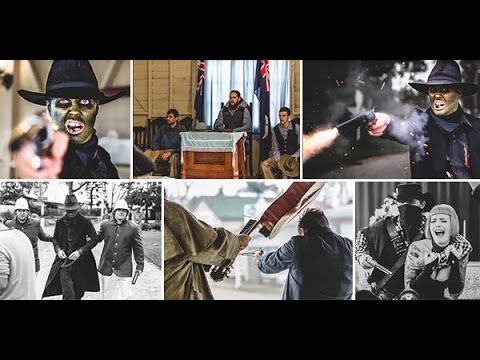 Night Riderpays homage to two of the band’s favorite pastimes- 1960’s classic westerns and first-person shooter videogames. It was directed by Steven Caldwell of Caldwell Entertainment, features gun slinging bandits, a cast of more than sixty actors, and an undead heroic vigilante known as “Night Rider”.

“For the Night Rider video, we wanted to do a really cool story line about a character we created called Night Rider” states guitarist Mat Cosgrove. “He’s an undead cowboy whose mission is to take anyone bad or evil back to the deep dark fiery pit where he came from. We as a band use this character as a medium to tell our stories, experiences, and learning’s of life. The true meaning of the song is that, you can make mistakes, and fail at things, but it’s the mistakes and failings that make you who you are. The Night Rider is a vigilante of sorts, he is initially arrested by the law, but when some local bad guys shoot up the town and gun down the sheriff and his deputies, he’s released from prison to carry out justice and uphold the law.”

A BREACH OF SILENCE released their debut full-length album entitled Dead or Alive, on October 1st through Eclipse Records (Mushroomhead, Bobaflex, Our Last Enemy). The album was produced by [B]Fredrik Nordstrom[/B] and [B]Henrik Udd[/B] (Bring Me the Horizon, Opeth, In Flames, Arch Enemy) and the band has previously released two music videos for the songs, There Will Be Blood and Circles.