Award winning Australian powercore-metal pioneers, A BREACH OF SILENCE have just premiered a new documentary video through Digital Tour Bus. The video was filmed during the band’s performance headlining Never Silent festival while on tour in Auckland, New Zealand. The documentary contains candid interviews with each band member about tour life, being in a band together, and their upcoming sophomore album The Darkest Road which will be released on October 7 through Eclipse Records (Mushroomhead, Our Last Enemy, Bobaflex). 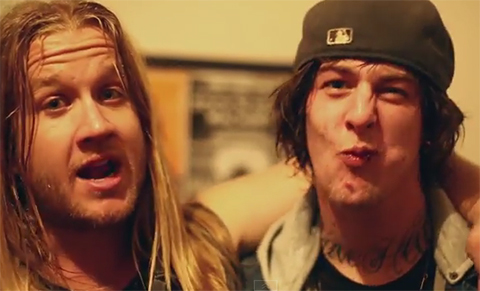 A BREACH OF SILENCE recently unveiled the cover art and track listing for their new album The Darkest Road which was produced by legendary Swedish producers Fredrik Nordstrom and Henrik Udd (Bring Me the Horizon, Arch Enemy, In Flames, Opeth). The band is known for their unique mix of modern metalcore and power-metal vocal breakdowns which many of their fans refer to as ‘Powercore’. Clocking in at over 56 minutes, The Darkest Road delivers fourteen tracks of technical, impressive songwriting that will forever be remembered as the band’s defining moment in music history. Additionally, a mix of song snippets from the album has been posted online at this location.

‘THE DARKEST ROAD’ is scheduled to be released on October 7, 2014, however pre-order the album from iTunes and download two songs instantly, before release date at: http://smarturl.it/abos-darkest-road

A BREACH OF SILENCE was thrown into the spotlight when they won Australia’s prestigious Q Music Award (2012) in the Best Heavy Song category. Shortly thereafter, the band inked a worldwide, multi-album deal with Eclipse Records, released debut album Dead or Alive (October, 2013) and have toured with bands such as Born of Osiris, Adept, The Amity Affliction, and Upon a Burning Body. In March of 2014, the band released their controversial Night Rider ‘first-person shooter’ music video which was inspired by their obsession with FPS video games and 1960’s classic westerns such as Hang ‘em High and The Good, the Bad, and the Ugly.

For more information on A BREACH OF SILENCE, please visit these websites:
www.EclipseRecords.com/A-Breach-Of-Silence
www.Facebook.com/abreachofsilenceband
www.Twitter.com/breachofsilence